I finished off 2018 with a hectic schedule of commissioned works, walks and residencies. Kevin Acott and I spent a brilliant week with Barbara Dougan at Grove Projects creating new work. It was a precious opportunity for us both, not only was it a rare chance to work uninterrupted for 6 days but we created new and unexpected work that we presented in a exhibition in Bury St Edmunds. We started the week by creating two new chapbooks Limey and Trial and Error which were published and in bookstores like Waterstones within 5 days. The second half of our week was spent exploring Bury St Edmunds and writing songs after we stumbled across the story of Nick Cave’s time spent in the East Anglian town, and also a fun trip to the Hoo Ha Record Club one evening.

In November we took some of our work and performed it at Rich Mix in London as part of the Poem Brut series run by SJ Fowler.

I worked on a really interesting collaboration with The Rutledge Lab, at the Max Planck UCL Centre for Computational Psychiatry and Ageing Research, inviting the public to talk about their perceptions of mental health and explore how this interacts with approaches taken by researchers and clinicians. Dear World Project was an installation featuring a post box where members of the public anonymously sent postcards about their own mental wellbeing which was then be organised at a sorting office. Scientists were on hand to discuss how we use symptom categories and diagnostic labels in neuroscience and psychiatric research.

In recognition and celebration of the 70th anniversary of the NHS, I worked in partnership with Prof Harvey Wells and curator Richard Meunier to discover the traces of East London’s medical history. We created a guide map commissioned by Queen Mary University of London that reveals the hidden relics of the hospitals that existed prior to the inception of the NHS. The map links together the Queen Mary sites that exist today: St Bartholomew’s Hospital founded in 1123 which is the oldest hospital in England to have provided continuous care for patients on the same site, The Royal London Hospital founded in 1740 which was once the largest general hospital in the country and where Joseph Merrick the Elephant Man was treated and Queen Mary’s Mile End campus which is situated next to Mile End Hospital. We launched the map at the Royal London Hospital Museum and created a video of the walk.

Before the NHS: A walk through East London’s medical past from Alban Low on Vimeo.

Love Tokens and Bad Pennies / The Art of Caring

I’m involved in two exhibition this Spring. During the Valentine month the artists and writers from CollectConnect explore the flip-sided theme of Love Tokens and Bad Pennies with an exhibition of 34 miniature sculptures. These objects are placed in public places (#unsettledgallery), helping us to remember those who we hold dear – or cast off those who we would rather forget. Every day throughout February we feature one of these tokens/pennies. A writer will also use the art as inspiration to create something new and fresh. Find out more HERE.

I was interviewed about the exhibition by Andrew Stuck for the Talking Walking podcast. Listen here – https://www.talkingwalking.net/alban-low-talking-walking/

We’ve got an open call to artists for this year’s Art of Caring. Now in its 5th year The Art of Caring is needed more than ever to show support for Nurses, Carers, and the NHS. This is your chance to exhibit an artwork that demonstrates your passion for this theme. If this is your first time then check out Anna Bowman’s documentary film about last year’s exhibition HERE.

I’m currently working on the album artwork for Georgia Mancio and Kate Williams new release. Also a new Juan Maria Solare album of Erik Satie compositions. For only the second time in my career my artwork will grace a new vinyl release, this time a 7″ sleeve for the new single from Firefay.

My album art appeared on the latest release from Momentum and one of my live sketches featured on the cover of Al Shields’ latest EP. 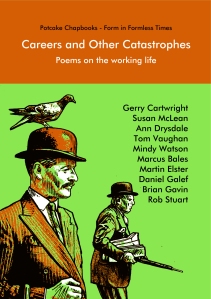 Chapbooks are still a passion for me and our publishing company Sampson Low. As the year turned from 2018 to 2019 I worked on a fabulous new series from Robin Helweg-Larsen in the Bahamas. The “Potcake Chapbook” series is named for the dogs of the Bahamas and the Caribbean – strays that live off the burnt scrapings of cooking pots. The poems in the series are a mixed bunch – but the potcake of our logo wears a bow tie to show that he and all the poems are formal. These poems are memorable in part because they rhyme and scan, as all truly memorable poetry does. We subscribe to the use of form, no matter how formless the times in which we live.

I’ve also illustrated a new chapbook from Emily Wooden, and 10 chapbooks as part of the Elmbridge Literary Competition.

This summer I’ll be exhibiting in the new Blavatnik Building at the Tate Modern from 10th to 16th June. Working with Harvey Wells and Kevin Acott, we’re creating a new interactive version of the Relationship Map we published for Mental Health Awareness week a few years ago.